Katja Zavoloka – musician from Kyiv / Ukraine, who released significant mp3 album Suspenzia, continues with her invented type of sound when melodies and crazy rhythms combined with abstract analogue and digital noises. This is her first full-length CD release following the number of compilation appearences and live performances in Kiev, Odessa and Berlin. The sound of Zavoloka is very impuslive mixture of rich, dense and often unexpected soundscapes, but at the same time it goes into warm and nice atmosphere. PLAVYNA inspired a lot by ethnic culture of Ciscarpathian region of Ukraine and thus mixed with ethno-folk music of that area. 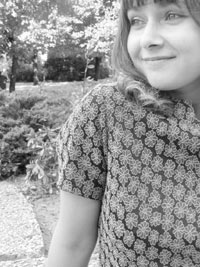