Tom Carter has best been known as one half (and sometimes one third) of the improvising psychedelic folk group Charalambides. During a California tour by that group, Tom was lent an old Gibson lap steel guitar for one San Francisco performance by the then-owner of Aquarius Records. That started a long love affair between Tom and San Francisco (which he can now gaze at across the bay) and also the lap steel. Instantly drawn to the long sustain and heavy resonances of the instrument, Tom recorded Monument (originally a cdr, now a release on kranky) and began incorporating it into Charalambides as well. 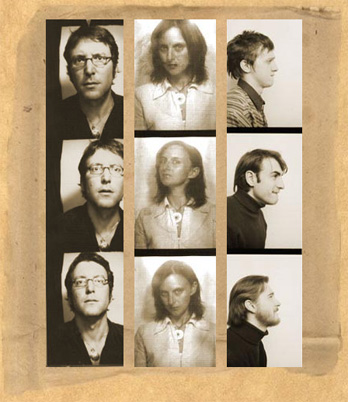 Vanessa Arn became a member of Boston/ California /Texas group Primordial Undermind soon after Tom’s brief tenure in the group. The potential for mountainous difference tones between the lap steel and the triwave tone generator (a custom built synthesizer) was immediately apparent to all parties, and Tom suggested a collaboration (which was
greatly assisted by the fact that Tom and Vanessa were at the time next door neighbors). A sole performance and a handful of recordings ensued and the results are here for your perusal.

The group under the Moglass came into being in 1997, preceded by five years of home projects that were never released in public. The Moglass widely used the latest technical achievements of the time such as sampling and postproduction of all kinds, hereat gaining a reputation as post-rock
musicians and performing at fashionable discos on repeated occasions. The evidence from this period is still kept in some albums as well as in record called “Saliva” available in mp3 format at Nexsound website.

Spellbound with the aesthetics of freeform music, the musicians of the group gradually turned away from glossy sound of their early records and began to decline invitations to fancy discos thus gaining freedom of creating music at home and communicating with a bunch of soul mates scattered all over the world. Up-to-date records of the Moglass are spontaneous improvisations, mostly live records, that by no means always can be called free-noise because sometimes they are very gentle and melodic.

*short version of this track appears on v/a Rural Psychogeography CD on Nexsound.
Designed by the Moglass.